ˌrēˈɡrō/ verb/ gerund or present participle: Regrowing "to grow or be grown anew or continued growth after an injury or after having died or withered" 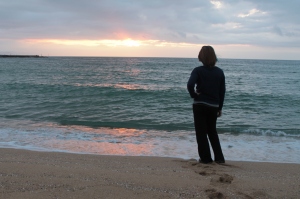 Lately, I have been processing through how thankful I am for exactly where I am, both in life in general and physically. Sometimes, especially over the last couple years, I find that I get so focused on surviving, getting through, and just trying not to botch things up too badly that I forget to look around. Then, there are other times, like recently that I am constantly overwhelmed with thankfulness for exactly what is happening.

Recently, I was thinking through the process by which I got to where I am, and I am kind of amazed at how things have worked themselves out so far.

If you missed it, I decided to pursue my consulting business full-time; and, while there is a certain level (ok a whole heck of a lot) of uncertainty, I have totally been in awe of how God has stepped in both in huge ways, but also in the smallest of ways. Once I (finally) decided to make the switch, my extreme level of fear of failing dissipated like the morning fog. I just knew that this decision was exactly right (as oh so many had been telling me for a while).

Virtually instantly, God provided a couple of new clients, a tremendous amount of encouragement from so many people, a possible part-time job in the same field, and more peace has settled in my heart than I have felt in almost longer than I can remember.

Internally, I felt as though I had just accomplished the biggest feat, and I suddenly exhaled the breath I didn’t know I was holding.

Last week I was driving and realized that for the first time in more than a year, my thoughts and feelings both agreed that, “this consulting thing is going to work, and.. it will be really good.” I was almost shocked and started laughing at myself, alone in the car about the fact that I can move so slowly, and often be the last to realize some things.

However, if I only credited making a decision in terms of which direction to go as the reason why things feel so much more at peace, I would be skipping half of the equation entirely…

I have the most amazing friends. I say that often, to basically anyone who will listen, and I mean it every single time. Throughout everything, my friends have been supportive, encouraging, offering ideas or prayers, and have patiently spent an exorbitant amount of time just letting me verbally process. I am so beyond thankful for each one, for the ways in which they have shown me practical love, and carried me when I just could not do it or handle it anymore. My friends have supplied me with hope, excitement, and laughter in times when I just could not find my own.

Finally, I feel safe. Emotionally, spiritually, AND physically I feel safe because for so long I have not felt as though I had all three.

I feel as though I have finally stopped clenching of my white knuckled fist and have taken a deep breath.